What one word would your friends use to describe you? 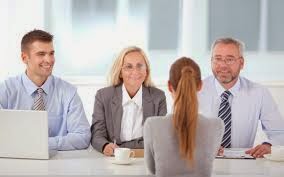 It’s one of those damnable interview questions that I don’t know about you but I definitely stumble over – how the heck would they describe me?  I tend to fumble around for a bit before mumbling something about ‘maybe a good listener?’ and tail off with some words about being ‘fun to hang out with’.  Miserable stuff.

So the other day I actually did it – I asked a few friends what one word they’d use to describe me.  They are my friends so they said some lovely lovely things (thanks friends!) but there was one word, one description I was kinda looking for because it’s really the thing I wanted to talk about in this post.

The closest anyone came was: “Industrious”

It’s a nice word isn’t it?  Bit Victorian perhaps.  But a good word.  A solid word.  A word you can trust to ‘get things done’.

It is also, quite possibly, a word that describes the very worst part of myself; that bit that is ALWAYS doing stuff, ALWAYS busy.

One of the things I often wonder is what it’s like to not be busy?  What is it like (and please, feel free to comment below with any answers you might have….) to come home at the end of a day, flick the kettle on and I think “Oooh, dunno what to do with myself tonight”?

Whilst I think most of us are to some extent are suffering from a 24/7 culture overload I think, for me at least, it would be wrong to blame ‘the world in which I find myself’ entirely.  It would feel the same as blaming the existence of cigarettes for the fact I smoke (I don’t by the way, but I have been a smoker in the past).

A fellow student on the MA and I recently jointly made a (frankly exhausted) vow to NOT rush into the next big thing life-wise.

And yet.  Only yesterday I caught myself thinking about how once this exam is over (less than a week to go….) and coursework submitted (this time next week…) I’ll suddenly be free of the constraints that come as standard with an MA. 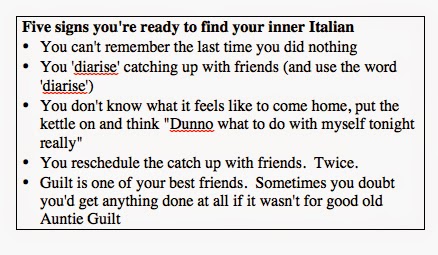 Now.  Was my mind wallowing in the warm shallows of how wonderful it might be to experience the dolce far niente, the infamous Italian ‘sweetness of doing nothing’?  Was it even gasping grateful gulps of joy at the time suddenly available to let the stories that have been running round in my head out and onto the page finally after months of being penned up (excuse the pun…)?

Don’t be ridiculous.  Mostly I was thinking of the day trips I could do to catch up again with friends and family; jobs I could do; gifts I could make for people; things I could do to best support the mad scientist; new and exciting sporting ventures.  You know the sort of stuff…

The list escalated from there to be honest and it was only thanks to the remembrance of that conversation with my MA classmate that I managed to catch myself in the apparently compulsive act of quadruple booking myself.

What my soul longs for most days is some solitude and reflective time but I battle endlessly with a sense of guilt if I am anything other than (i) busy with work/study or (ii) busy with social. The truth is I have an over-developed tendency to swing interchangeably from one busy-ness to the other.

I’ve found myself asking; ‘when is a good time to give up being busy?'  As any addict will tell you, there’s NEVER a good time.

You can spend a huge amount of time navel-gazing to work out why you’re like this and what the triggers are.  But I suspect in the long run it’s a case of committing to quitting. What worked for me with giving up smoking was going cold turkey and just, frankly, not smoking.

So, the busy-ness detox started this weekend.  The mad scientist and I went to his family’s farm in Sussex.

Rather than punishing myself with a gruelling Easter weekend at home filled with endless work and beating myself into senseless depression about what needed to be done, I packed the laptop, some good intentions and had a (shock horror) ‘balanced’ weekend.

Did I get as much done as if I’d stayed at home, trying to pretend I wasn’t hanging out on Facebook?  As we don’t get to live parallel lives, I’ll never know.  But what I do know is that I had a happy weekend and I’ve emerged into the week contented (and probably more pleasant to be around).

And those text messages from my friends assures me that they are a lot less interested in beating me up for my social flakiness than I am.  Which tells me I could turn my internal ‘guilt-o-metre’ down and get on with booking in some time to simply hang out with my inner Italian….

5 ways to get your creative idea funded in Bristol

Let's be honest, creative working is still assumed to be something you do for love rather than money.  After all you're just having fun so it's not really work, right?

Bristol is recognised as a creative and cultural hub and for many of us that's the very reason why we moved here in the first place.  But balancing paying the rent and giving your creative projects their all can be a real challenge.  I spoke to some of Bristol's creative community to find out what top tips they could share.

Graphic novelist Ben Dickson has published four books and has a fifth coming out later this year.  However he is exploring the world of Kickstarter as a way of getting his book Unfinished City out there to the public.

Kickstarter is a crowd funding platform that helps people fund projects from films to stage shows, music, comics, video games and design related projects.  'Kickstarters' set up a page to ask for funding for their idea in exchange for which 'backers' receive a personalised copy of the created end product.  Each Kickstarter has a target amount they want to reach within a set period of time.  If time runs out and the funding goal is unfulfilled backers get their cash returned.

Dickson said: "We didn't want to take it directly to a publisher because it's an unusual project - it's set in Eastern Europe, it's not about superheros and it's a crime novel - which is a niche genre.  Self-funding through Kickstarter will ensure that the book is done the way we want it to be."

Read my full interview with Ben here and find out more about Unfinished City here.

"Is your work an act of self-expression or an act of communication?"

There are many routes to funding your ideas it can be hard to figure out which one is right for you.

Former BBC Head of Co-Production and Acquisition, now founder of production company Wildseed Studios Jesse Cleverly advises would-be creatives to ask themselves this tough question first: "Is your work an act of self-expression or an act of communication?"

Cleverly says having a clear answer to this question will automatically direct you in terms of where you pitch for your money: "Funding bodies and grant giving organisations are the people for an act of self expression - broadcasters and commercial production companies are the people to go for acts of communication as they are interested in making "products" that are designed to travel out into the world."

Whether your work is a heartfelt, personal piece or it's designed to cause a specific reaction on an audience 'out there' here are five routes to finding the pot of gold you're looking for:

A quick survey of Kickstarter shows that one in two Bristol projects are successful in their funding bids, so it's worth a punt.  Ben's top tip is make a video - you're unlikely to succeed without one.

Bristol based Wildseed Studios offer an interesting model in which the creator and the company go into a commercial partnership.  You pitch your idea, they give you the money to make it. They advise, mentor, support, market, sell and monetise the content and share in the commercial success with you.

Other funding options include checking out what Bristol City Council offer and organisations such as Arts Council England. Arts Council England's South West Area Director Phil Gibby says when applying for arts funding there are a couple of obvious pointers to follow including reading the guidance carefully and seek advice of others who've written successful applications previously. He also said: "If unsuccessful, do seek constructive feedback from us - we're always happy to provide it!"

Get involved in the creative community.  Bristol is a hugely helpful and friendly place.  Have a look at what venues show the sort of things you're interested in producing, follow them on Twitter and  Facebook.  Social media is a huge way that creative organisations let you know if they've got competitions or internships coming up.  I got my first paid for (yes, paid for!) script opportunity through tweeted information...

Yeah, you do this all the time I know, but what I mean here is opportunities do exist in more obscure places.  Bristol is about to be the European Green Capital next year for example but a key element of the bid is how we express that creatively as a city.

Locklease Labour councillor and spokesperson on arts and culture, Estella Tincknell (@EstellaTincknell) warns against going too far with this approach though.  She says "I'm not an expert on funding but I think it's important that you don't bend your project to fit the criteria of funders or you'll end up with a project you don't want to do!"

Right. Well then.  What are you waiting for?  Go get that money and get creating!

Related Links:
Bristol Theatre Net is the network to be hooked into if you're interested in anything theatre in Bristol
Creative Bristol is an online resource for all things art, craft and design in Bristol
Bristol Short Story Prize for the writerly types out there
Bristol Culture for news on all things cultural in Bristol