How reading can save the world Just mashing up two current news stories - Gove banning* books from the secondary school curriculum that haven't been written in the UK - and the rather terrifying swing to the right we've seen with UKIP taking the majority of the votes in the European elections last week -  and I have a suggestion.

Yes, it's a grandiose claim, but frankly I never feel better about life than when I'm quietly ensconced somewhere with a cup of tea and a book, so what are the chances this feel-good route to zen might be equally applicable to the rest of this nation?

But seriously - we know that what we read affects how we understand and feel about other people.

Perhaps if we read more by writers from Europe and her border neighbours (as a start - the rest of the world next up on the hit list) it would revolutionise our understanding of how we fit into the great mystery that is the European Union?

It's hard to hate, or call people stupid, or call them names when you've read their history, you've championed their heroism, fallen in love with their poetry and cried at their tragedy.

So let's not stop at taking the American novelists off the reading list (and as John Steinbeck's biggest fan, trust me it pains me to say that...).

Let's take the books written by the British off the curriculum.

How might the following reading list alter the world view of our students, who will become our workers and our leaders:


It's a random rag tag of books, by writers from various places (European and beyond).  Not better, nor worse than any other list, just made up of a selection I grabbed from my bookshelves. And I agree my approach is very Matthew Arnold - the Victorian prescriptive 'improving' nature of reading. But I think it would be wonderful if our school system helped us work towards proving the hypothesis that the pen is mightier than the sword....

And so to bed. To read, obviously.

*So it turns out Michael Gove hasn't banned any books from the curriculum - in fact he wants to 'broaden' the books that kids read at GCSE.  That the prescriptive nature of this broadening may in some circles be interpreted as 'double speak'.  Let's hope Orwell's 1984 continues to be squeezed into the free choice selection of the curriculum (as Gove himself apparently hopes it will)....
Posted by Ridley at 13:49 1 comment:

Email ThisBlogThis!Share to TwitterShare to FacebookShare to Pinterest
Labels: European elections, Michael Gove, reading, reading lists to save the world, swing to the right, UKIP

Should I even be here? Reflections on #WHA67 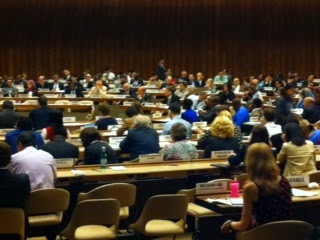 This is a question that rattled round my mind when I came to the World Health Assembly (WHA) last year and, arriving back in Geneva for WHA67, I find myself chewing over that same question again.

After all I'm not a doctor and I have no medical or scientific background to speak of (living with the mad scientist probably doesn't count...), nor have I been schooled in public health policy.

So immediately I'm in a position of 'not knowing'.  And there's just so much to 'not know'.

The language spoken here is at times impenetrable.  This year the conference is abuzz with discussion about the formal inclusion of 'Non-State actors' at the World Health Organistion (WHO) table.  These people are not, as it turns out, Shakespearean bards funded from a supra-national purse*, they are in fact (for those of you who hate a mystery) the private sector, universities, philanthropic funds and Non-governmental organisations (NGOs) - most of whom are currently (officially at any rate) outside of WHO inner sanctum of proceedings.

Similarly someone you know may at this very minute be suffering from a Non Communicable Disease (NCD).  Again, this doesn't mean they are particularly shy or mute, but rather that they have heart disease, diabetes or are obese (e.g a disease you can't catch, hence non-communicable). 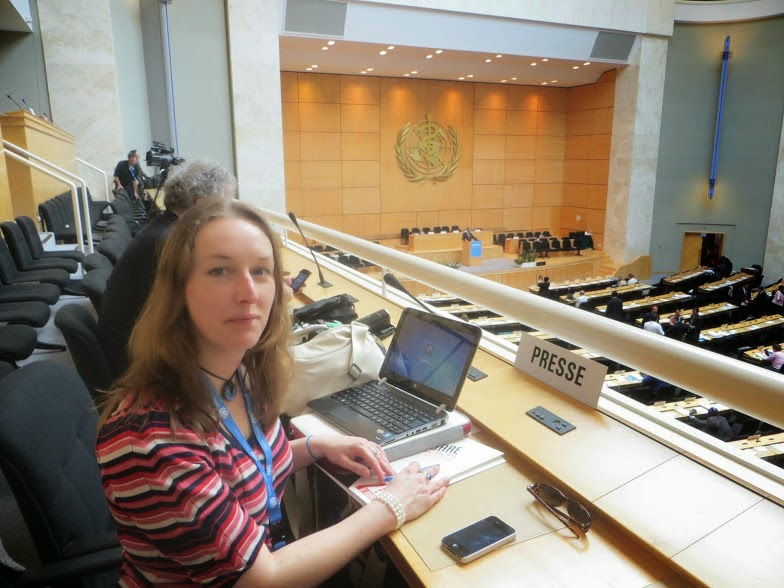 The really scary thing is, the examples above fall into the category of 'the easy stuff'. Easy or not it can be intimidating for the uninitiated - knowledge is after all power (as Foucault would say) - and last year I was definitely intimidated.

It's not just the language or the science though.  It's the politics.  It honestly hadn't dawned on me prior to last May to think about health as an international diplomatic bartering chip.   Not until I realised that many of the ministers rocking up to the World Health Assembly were actually Minsters of Finance or Foreign Ministers in their own countries, rather than (or, in addition to) the Health Minister.  There's more than just health policy happening here then.

Health is an economic issues too - who has the money to fund the initiatives, who receives money, how much and how do they use it?  (Hence the presence of Finance Ministers as well as NGO's lobbying for their issue to be focused on and, a new one on me this year 'BINGOs' - Business Interest groups apparently acting as Non-governmental/benign organisations.  The plot thickens...).

It's also a community.  Everybody knows everyone else and there's so much gossiping (I mean important and profound conversations) about what's really going on happening in the lobby areas and coffee shops at WHA.  But like the new girl on the first day of school you can hardly just walk up and into one of these conversations.  It takes time, you have to become known and, presumably, trusted.

Last but not least in the intimidating stakes is the super size of the WHA.  Some 2000 delegates and lobbyists (and a handful of journalists....), many of whom are at the top of their professions and so represent a vast depth and breadth of knowledge in their areas, gather for WHA.  And where do they gather? In the very opulent and grand Palais des Nations - a building that by design is grandiose and imposing.

So frankly it's hardly surprising that on my first visit to WHA last year I was a little overwhelmed.  Nor is it surprising that this year's World Health Communication Associates (WHCA) graduate journalists have felt overwhelmed and intimidated once or twice.

But that is the point of the WHCA Health Communications programme.  To bring 'cub' reporters into a huge arena that is over-briming with fascinating stories and give them enough courage and support to dive on in ask questions.  We're in a perfect position to make those who talk to us explain in plain English what is going on and then to share that information with the rest of YOU who equally probably don't talk this very special blend of bureaucratic, scientific and political patois.

Despite the fear and trepidation that we shared as graduate journalists embarking on the week at #WHA67 I think everyone has emerged from it feeling more capable and able to enter the arena of public health.  Perhaps our biggest challenge if we continue working and writing in this space is to keep enough of our innocence and our everyday language in our reports.  We have to ensure that our reports continue to be accessible and written for 99.9% of the world, for the people who are impacted by the issues and the decisions made in these hallowed halls, whilst learning and knowing enough about public health to be an effective and trusted translator rather than pseudo medic or politician.


(*although I do know a Shakepearean actor who was paid to be a virus at a WHO event once....)
Posted by Ridley at 13:15 No comments:

Welcome to WHO and the global health tardis (yes, it really is bigger on the inside...) 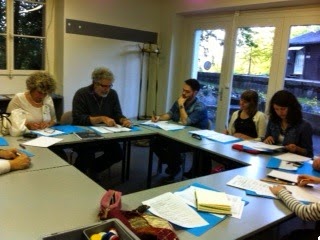 So.  I'm in Geneva gearing up to attend the 67th World Health Assembly (WHA67) which kicks off here on Monday.  The what, I hear you say?  You're where?  Why do I care?

All good questions.  Basically I'm here as part of an event that aims to increase global health awareness and understanding. It has been organised by the World Health Communication Associates (WHCA) and I'll tell you a bit more about them in a mo.  I came last year and having caught the health bug (yes, I really did just say that....) I'm back again along with a fresh cohort of newly graduated international journalism students (some of whom are pictured in the top lefthand corner there at our first briefing this evening...).

How healthy you are, the decisions you take about your health or about the things you do that affect your health will be determined for the greater part by the communication and information you have about that topic.  Which makes it pretty important that there is good, trustworthy and accurate information available to you.  Right?

However we're all familiar with the challenges of getting good, trustworthy, accurate health information. The (mis)information about the links between the MMR injection and autism is one example of how what's communicated in the media affects the decision making of parents.  Or the current row about statins which has left people feeling pretty confused about what they should do and when/if they should take them.

The WHCA believes that health literacy of a community - e.g. how much you know about health issues - directly relates to the health and wellbeing of the people in that community. The media in particular have a huge role to play in this of course. But here's the thing: Actually health is complicated.  For a start there are so many health issues and the complexity of the science underlying each of them is dizzying for any would-be journalist needing to get their 400 word copy out by deadline.  Copy that needs by it's very nature to be crystal clear and readily understood by the woman/man/child on the street.

Add into that the economics of health - staying alive and well is an expensive business at the individual and the national level - and the fact that disease doesn't pay any attention to the boundaries we draw between countries. Suddenly you start to see that health is an international, political and economic issue as well as a personal one.

There are 193 health ministers from around the world about to congregate here in Geneva.  They are going to get together in a room and decide what the worlds major health priorities are today and who is going to do what about them over the next 20 years.

This means that what is discussed here over the next few days will, in no uncertain terms, have an impact on your life.  Which is pretty important I reckon - after all you've (probably) only got the one and it is a wild and precious thing.

My intention over the next few days is to blog and tweet about what's happening here and to take a deeper dive into some of the issues being discussed. I hope to throw some light on the workings of the #WHA67 and kick off some discussions on the rights and wrongs of health journalism as it stands today.  But for now.....I'm going to take a spoonful of some of the best medicine there is, sleep.  A demain.